The LAWRENCE funun Gallery presents contemporary art in the context of migration and globalization. Whether paintings, photography, video, installations or design and fashion—there are no limits to our media. Quite the opposite—interdisciplinary approaches that reflect intercultural ideas and concepts are highly welcome. Our curator Anas Homsi stands for quality and conceptual coherence – he himself being both a graduate of the Academy in Damascus and an internationally successful painter and photographer. But the LAWRENCE funun Gallery is also a matter of our executive leadership and is also substantially led by Frank Alva Buecheler who, through experience as a professor of aesthetics and art market, knows what he's doing. And last but certainly not least, the gallery's program profits immensely from our Italian partners at M'AMA.ART.

The LAWRENCE Gallery is open during the restaurant's normal business hours. 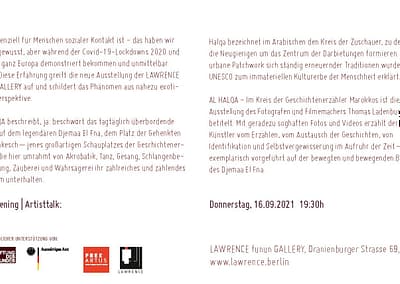 Social contact is essential for us humans - we have always known that, but during the lockdown in the spring of 2020, we have experienced it directly throughout Europe.

The new exhibition of the LAWRENCE funun GALLERY takes up this experience and portrays the phenomenon from an almost exotic perspective.

AL HALQA describes, yes: conjures up the daily exuberant life on the legendary Djemaa El Fna, the square of the hanged in Marrakech - that great scene of storytellers who entertain their numerous and paying audience here, framed by acrobatics, dance, song, snake charming, magic and fortune telling.

In Arabic, halqa refers to the circle of spectators formed by the curious around the center of the performances. This urban patchwork of constantly renewing traditions has been declared an Intangible Cultural Heritage of Humanity by UNESCO.

AL HALQA - The Storytellers of Morocco is the title of the exhibition by photographer and filmmaker Thomas Ladenburger. The Berlin-based artist uses almost magical photos and videos to tell of storytelling, of the exchange of stories, of identification and self-assurance in the turmoil of the times - exemplified on the moving and stirring stage of the Djemaa El Fna.

Thomas Ladenburger, born in Ellwangen/Jagst in 1975, first studied at the San Francisco Art Institute in the department of Interdisciplinary Media. In Berlin, he graduated as a master student in 2005 at the University of the Arts in the Experimental Media Design program. In addition to numerous freelance camera works and sound projects for television and cinema productions, Ladenburger produced and realized the AL HALQA cycle for fifteen years, among other own cinematic works.

FRAGILE – HANDLE WITH CARE
Installation and photos by
Marie-Luise Liebe

Luvuro asked by Mr. Frank
To come back to LAWRENCE
New paintings by
Luvuro Kakatula